September 2 is my birthday. One can't help feeling lucky because composers born in September include Clara Schumann, John Cage, Dmitri Shostakovich, Arnold Schoenberg, Johann Pachelbel, Anton Bruckner, Henry Purcell, George Gershwin, Jean Philippe Rameau, Giacomo Meyerbeer. As such, September, which hosts the most beautiful season of the year, has a special place for me.

Especially the fact that Clara Schumann was born in September makes September even more special for me because Clara is my idol. His eight children and his wife, to whom he is attached with great love, his love for family life, his struggle for life, the concerts he went to because he had to earn money from long trips at the expense of his life, and his passion for music and piano despite the pressure his father put on him, always gave me hope. I even remember saying to myself from time to time. “Ebru, if Clara succeeded in the 19th century through impossibilities, what do you see as an obstacle to yourself today?”

I'm sure it's been a long introduction, as always if you want to read more about Clara Aydin Buke amazing work of our teacher "The Light of Romance ClaraI can't help but recommend ".

Let's talk about the song that everyone who starts an instrument training plays at least once, and from the day it was first composed, the copyright debates have not been able to end.Happy Birthday To You' to the song.

"Happy Birthday To YouAfter being composed as a song, it has been adapted for almost every instrument, and its adaptations have been performed for piano and violin, symphony, solo piano and Oboe. Mistake USA Today Warner/Chappell Music Inc., the third-largest music distribution and production company in the world, owns the copyright to the song, according to an article by its author, Andrew Wolfson.

Warner/Chappell Music Inc. for years, thousands of people have been demanding copyrights if they use the song, which the rights were with this company until 2030. Jennifer Nelson, president of a film production company, has sued Warner/Chappell Music Inc, demanding that it release the song to the public and even refund royalties it has earned over the years. After years of litigation, it was fortunately declared in the public domain by a judge in 2015.

This song, which every 5-year-old child learns and sings, entered the Guinness Book of Records and became the only song sung more than Bach, Beethoven and the Beatles in England. Considering that the world's population is approaching 8 billion, a very, very large number of people both sing and play the "Happy Birthday To You" tune. Again, according to the article, the song used in 143 films and dozens of commercials has been translated into 18 languages. The power of music cannot be underestimated.

So who composed this song, which has entered the world of so many people and every home and every age? 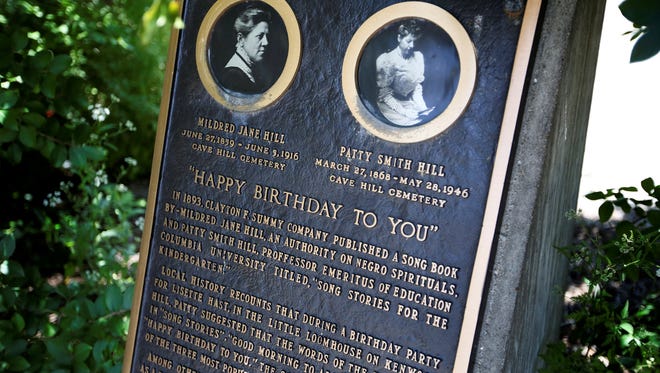 The composers of this song are sisters Mildred Jane Hill and Patty Smith Hill. Their names are still inducted into The Songwriters Hall Of Fame today. Mildred and Patty were working as kindergarten teachers at the Louisville Experimental Kindergarten School, Kentucky, and this song is actually a song Patty and Mildred composed for their students.Good Morning To All” "Good Morning To You” It was the song "Good Morning Everyone".

Mildred wrote the melody for this song, and her younger sister Patty wrote the lyrics, and it was first published in 1893. Meanwhile, Prof. Although a researcher named Robert Brauneis spent two years researching the copyrights of this song, which revealed that Mildred was not a kindergarten teacher, the truth of the matter was that she could not find much evidence.

Mildred Hill was actually back then. Johann Tonsor He wrote articles under his pseudonym, and his 1892 article “Negro Musicarguing that existing black music will be the basis of a distinctively American musical style, New World Symphonyin the process of creating Anton Dvořák also affected. Mildred, who later said goodbye to the world as a famous musicologist and a respected professor at Patty Columbia University Teachers College, and who did not see her song become famous until she said goodbye to the world, is one of the unlucky composers. But the manuscripts and articles of M. Hill, who is a hard worker and educational programmer, are in the University of Louisville Music Library in Kentucky.

Although he himself could not witness at the time Good Morning To You, “Good Morning Everyone” The popularity of his song increased so much that in 1912 these words were used. "Happy Birthday" dead.

Although no specific person could be identified as the authors of the rewritten song over the years, the copyright of the song was acquired by the Mildred and Patty brothers with the lawsuits filed by a company called Summy Company, but as I mentioned above, it became a royalty-free song in 2015.

Happy Birthday To Me!

From the Original Song…

Good Morning to You

Good Morning to You

Good Morning to All…